FUNDAMENTALISM AND NEO-LIBERALISM: IMPACT ON WOMEN AND MINORITY RIGHTS

You are warmly invited to a seminar on Tuesday 22nd of May, 9:00-12:00, in room A7F387, European Parliament, Brussels, organised jointly by the Culture Project, the European Network of Migrant Women, and the Coppieters Foundation. The seminar will bring together experts and activists from around Europe to critically examine the intersection between the different forms of fundamentalism and the neoliberal agenda, and its impact on the collective rights of women and minorities in Europe. 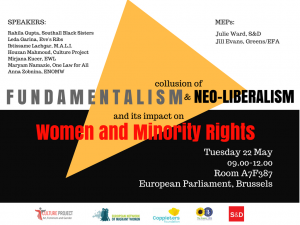 COLLUSION OF FUNDAMENTALISM & NEO-LIBERALISM:
ITS IMPACT ON WOMEN AND MINORITY RIGHTS

The last two decades have witnessed a rapid rise of fundamentalism, the far right, and other extremist, even violent, movements across the globe. From the USA and the UK, to Russia, Turkey, and Poland, the extremist organisations driven by radical religious and nationalist ideologies, have been jeopardising the rights of women, sexual minorities, and migrants. These movements reject universal human rights, attack female sexual and reproductive status, attempt to criminalise homosexuality and dehumanise migrants and ethnic minorities.

Though clearly incited by the nationalist, populist, and patriarchal interests, these developments have also been aided by the simultaneous rise of neo-liberal ideology, particularly in the form cultural relativism and identity politics, which seek to discourage political analysis and promotes the politics of individualized self-identification and self-segregation over collective organising and solidarity.

In Europe, this collusion between the two seemingly different forces, resulted in the de-secularization of public policy; in particular, the relations between the state and ethnic minorities. Thus, during the years since 1990, religio-legalism – the enforcement of religious law by specifically religious courts – has become tolerated or endorsed by civil governments and NGOs alike. This had and has a tragic effect on the rights of women, of ethnic minorities, and raised legitimate concerns among feminist and women ethnic minorities groups.

In the context of these political developments, the European Network of Migrant Women (ENOMW) and the Culture Project (Kurdish) organise a seminar at the European Parliament in Brussels, Belgium. The seminar will bring together the experts from around Europe to critically examine the intersection between the different forms of fundamentalism and the neo-liberal agenda, and its impact on the collective rights of women & minorities in Europe.

Seminar is supported by Coppieters Foundation