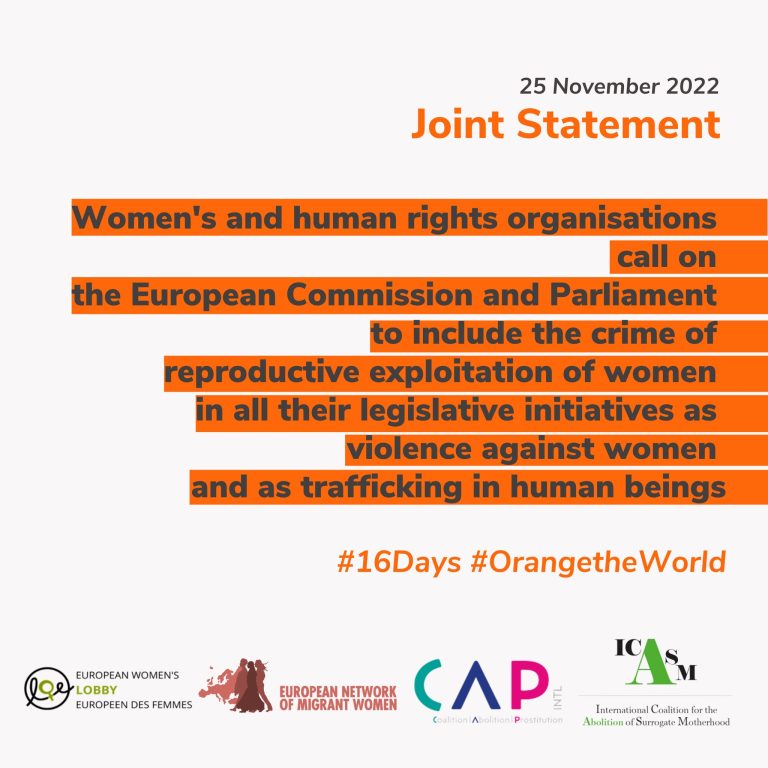 Women's and human rights organisations call on the European Commission and Parliament to include the crime of reproductive exploitation of women in all their legislative initiatives as violence against women and as trafficking in human beings.

By reproductive exploitation, we refer to: prohibition of abortion, forced abortion, forced pregnancy, surrogacy, oocytes sales. These practices lock women into the role of reproducers for others, to the detriment of their health and human rights. Therefore, they have to be included in any instruments dealing with violence against women.

This statement focuses on surrogacy.

Surrogacy is the social practice that consists of recruiting a woman to gestate and give birth to one or more children, whether they are conceived with her own oocytes or not, in exchange for payment, and through a contract, to give the baby away, thus renouncing her parental rights, to one or more people (called commissioners, clients or buyers1) who wish to be designated as the parents of the new-born2.

Surrogacy entails the objectification of women, the commodification of the new-born, the trafficking of human beings, and the violation of human dignity of the woman exploited as ‘surrogate mother’ and the child, thus undermining women’s and child's rights.

Directive of the European Parliament and of the Council on combating violence against women and domestic violence.

In its efforts to update the notion of violence in this directive, the European Commission should go further and include reproductive violence that exclusively affects women.

Today, in Europe, the benchmark on male violence against women is the Istanbul Convention3

The Istanbul Convention defines VIOLENCE AGAINST WOMEN as “all acts of gender-based violence that result in, or are likely to result in, physical, sexual, psychological or economic harm or suffering to women, including threats of such acts, coercive or arbitrary deprivation of liberty, whether occurring in public or private life”. It also recognises that violence against women constitutes "a violation of human rights and a form of discrimination against women".

However, the Istanbul convention is more than 10 years old. Globalisation and new technologies have facilitated new forms of male violence, such as, for example, the cyberviolence. For this reason and given the lack of ratification by certain EU states, the European Commission has undertaken to create a new Directive that would address, in a comprehensive manner, all forms of violence against women, binding member states to preventing and eradicating them.

In order to become a truly comprehensive EU legal instrument that leaves no woman or girl behind, the violence inflicted upon women through reproductive exploitation must be included in the new Directive. Reproductive exploitation is a fast growing global multi-million industry and a form of violence against women. To satisfy someone else's parental wishes, women are subjected to physical, economic, medical and psychological violence which has been widely documented4. Women’s reproductive capacity should only serve their own parental projects, not that of others, which is exploitative.

In surrogacy, the mothers exploited as “surrogates” relinquish all their rights throughout the process. Worldwide, the contract and/or regulation governing this practice disposes of human beings, both the mothers exploited as surrogates and the future child (making use of them depriving them of their freedoms and rights). In Europe, most countries aware of this violation of the fundamental human rights enshrined in the EU Charter, have outlawed this practice on their territory. However, these provisions are systematically undermined by the development of cross-border surrogacy.

Legitimising or facilitating this practice is tantamount to fostering the demand for the exploitation of the most vulnerable by the most well-off social classes. To satisfy their desire for a child an exemption to human rights is granted, to the detriment of women, especially those from the most economically and socially vulnerable groups. Considering all these elements, the practices described above as reproductive violence, rooted in inequality between women and men and a manifestation of structural discrimination against women, fall within the definition of violence against women5 of the Istanbul Convention and, as such, should be covered by the directive.

Communication from the Commission to the European Parliament, the Council, the European Economic, and Social Committee, and the Committee of the Regions on the EU anti-trafficking strategy (2021-2025).

• The activity (recruitment, transportation, harbouring or receipt of persons);

• The means (threat, use of force, deception, coercion, abuse of power, position of vulnerability, giving or receiving of payments or benefits to achieve the consent );

• The purpose (exploitation of victims).

These criteria have been adopted by the European Union in its 2011 EU Anti-Trafficking Directive in its definition of trafficking. The victim's consent to the intended exploitation is irrelevant if any of the above means have been used.

Human dignity is the very basis of fundamental rights and a foundational value of the European Union (Article 2 TEU). According to Article 1 of the Charter of Fundamental Rights of the European Union, "human dignity is inviolable. It must be respected and protected". Every human being has an inviolable and intrinsic dignity, which is a universal value, and her or his body must be respected as part of the whole human person.

Not only does surrogacy directly destroys human dignity, but it meets all three criteria for the classification of trafficking. Mothers recruited as surrogates by brokers or clients may be "transported" to the clients' country, or to a third country to circumvent regulations, or subject to mobility within their own country. Their so-called "consent" is often based on manipulation, deception, or pressure, because of their social and economic vulnerability. The result is financial gain for the stakeholders involved (brokers, psychologists, lawyers, clinics, medical personnel, travel agencies), and the procurement of new-born human beings for the clients.

Cross-border ssurrogacy is emerging as a new form of human trafficking due to globalization, increased mobility, and the development of new digital and/or medical technologies as it has been highlighted by certain bioethics committees7. As such, it should be specified and added into the revised directive on trafficking. The Directive on violence against women that includes in its scope reproductive exploitation will contribute to better prevention of crime, improve protection of women victims and of children's rights. It will contribute to strengthening another foundational value of the European Union, i.e. equality between women and men and the access to fundamental rights stemming from the Charter of Human Rights of the European Union. To do so, the European Union already has strong foundations as it has repeatedly condemned surrogacy:

- In 2017, as a source of human rights violations, in the context of human trafficking9;

- In 2021, its impact on the health of mothers exploited through surrogacy and the breach of equality between women and men it represents10;

- In 2022, it reiterated all its condemnations of practice of surrogacy in relation to the situation of women in the context of the war in Ukraine12.

We, the signatories of this joint statement, demand that the European Commission and the European Parliament systematically take surrogacy into account in their legislative work, as a reproductive violence inflicted on women, as human trafficking, and a violation of children’s rights.

ICASM - International Coalition for the Abolition of Surrogate Motherhood


OTHER SIGNATORIES TO THE STATEMENT