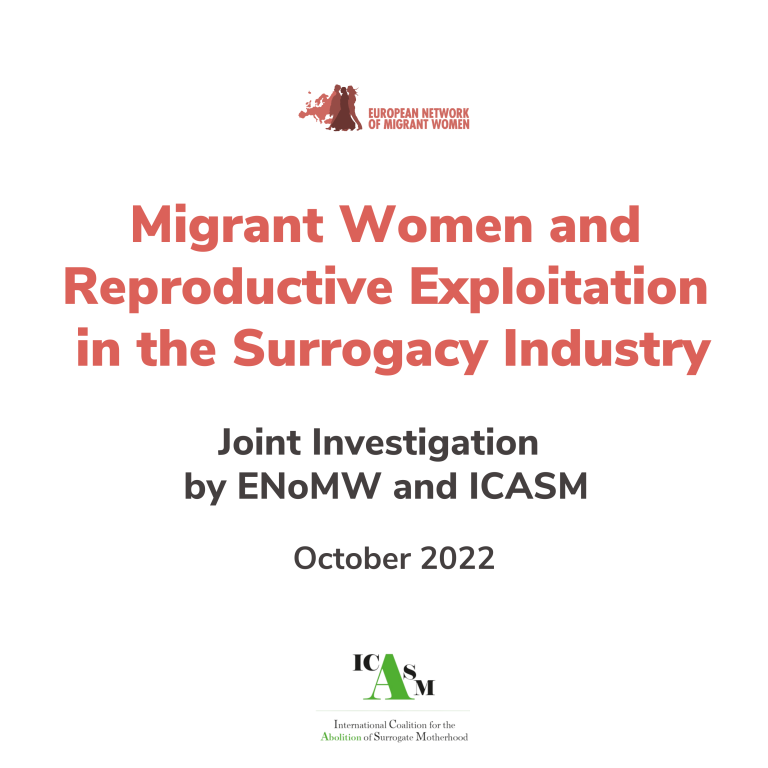 Migrant Women and Reproductive Exploitation in the Surrogacy Industry: Joint Investigation by ENoMW and ICASM

The International Coalition for the Abolition of Surrogacy (CIAMS-ICASM) and the European Network of Migrant Women (ENoMW) have become aware, through national and international media reports and social networks, of the existence of practices that amount to trafficking in human beings, namely, women, for the purposes of exploitation in the reproductive industry2 . These situations are inherently contrary to human dignity and equality between women and men as practices of exploitation of women's bodies.

Noting the lack of research on the subject, CIAMS and ENoMW decided to jointly carry out a survey on women exploited as “surrogate mothers”, oocyte donors or forced to carry a pregnancy (forced pregnancies) in cross-border practices. The aim was to identify and document the presence of women who are led to act as “surrogate mothers”, oocyte donors or forced to carry pregnancies in a country other than their country of origin, or on behalf of foreign third parties, in order to be able to alert states, competent authorities and partner NGOs, to how the above-mentioned practices may manifest in the context of migration (voluntary or forced) putting at risk the fundamental rights and human dignity of migrant women.

1. Are migrant women recruited as “surrogate mothers”, egg donors or for forced pregnancies in their country of arrival and without this being the reason for their migration?

2. Are women forcibly or willingly moved from their home country to a foreign country specifically for the purpose of surrogacy, egg donation or forced pregnancy?

More specifically, we hypothesise that there is a phenomenon of human trafficking behind the practices of surrogacy, egg donation and forced pregnancy, as well as multiple trafficking networks that use women in these practices as well as the children born from them. Indeed, as mentioned above, many disturbing reports of trafficking, particularly in Asia but also in Europe, have emerged over the past decade. It would also seem that these networks of trafficking in women for reproductive exploitation and of the children born from this exploitation are similar in their methods and organisation to prostitution networks, a fact that is all the more worrying when one knows how the latter operate. ENoMW and CIAMS therefore intend, through this report, to combat such practices.

In an attempt to answer our research questions and validate our hypothesis, we conducted a field survey. Firstly, the data collected during the survey and the methodology adopted to do so will be submitted to the readers. Then, the results of the survey will be analysed and discussed. To help us in this task and to enrich both our data and our reflection, we will draw on academic sources which, while not addressing this specific subject, sometimes evoke related issues such as migration, trafficking or surrogacy. Finally, a conclusion will be proposed in which we will return to the elements supported in this report and present what we intend to achieve as a continuation of this investigation.