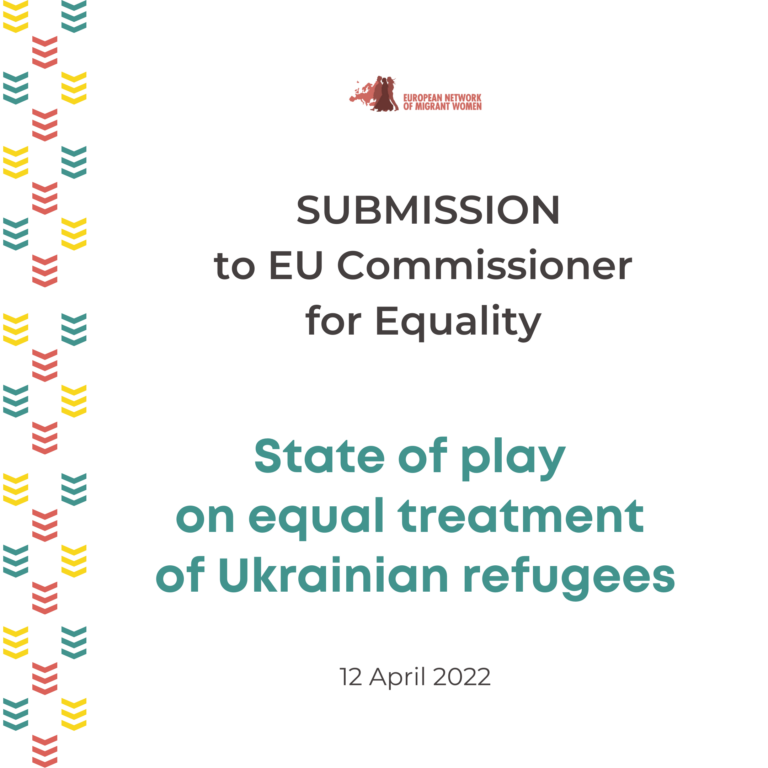 State of play on equal treatment of Ukrainian refugees, submission by the European Network of Migrant Women (ENoMW) to the Cabinet of Commissioner Dalli

Since the invasion of Ukraine by the Russian Federation on 24 February 2022, European Network of Migrant Women (ENoMW), through its membership, has been monitoring the situation on the ground, at the borders where Ukrainian refugee women cross into EU and in the destination countries. On 28 February ENoMW issued a Statement on the Invasion of Ukraine by the Russian Armed Forces. Since 24 February we have been collecting the evidence that we partly present in this short submission:

Even though the Temporary Protection Directive has been triggered by the Commission and has already came into force in almost all EU states, there is still a big lack, at the national level, in policy, guidance and concrete explanations as to how the Directive should be implemented For example, in some states the law enforcement and tribunals responsible for issuing relevant documents to the refugees have a lack in understanding whether those fleeing Ukraine can work o the territory of EU or whether they can travel back to Ukraine - this lack of knowledge prevents Ukrainian women from applying for temporary protection, as many of them report the desire to go back to Ukraine and fear being prevented from doing so.

2. SAFETY OF UKRAINIAN WOMEN AND GIRLS:

there is a concern about the lack of qualification of some volunteers offering support to the refugee women, in particular on Men’s Violence against Women and Girls and sex-specific work with refugees, which may result in inadvertent harms towards refugee women due to provision of unverified information and guidelines, in particular on accommodation, transportation and services. There are also concerns that traffickers and exploiters have integrated themselves into some of the support structures working at the borders. Our members reported instances, for example, at the Slovak border, when women were boarded in buses, with destination presumably in Germany - the contact numbers of these women had been collected with an agreement that these women would identify their location upon arrival - however, already several hours later it was not possible to contact them and up to this moment those women cannot be reached. These disappearances happen in the context when in various online support groups for Ukrainian refugees, including Facebook and Telegram channels, we observed the so called “sex work and erotica agencies” placing ads with “job” offers for Ukrainian women 20-40 y. o. At the same time in some states newspaper ads were placed by single men offering accommodation to “single or slim Ukrainian women”, sometimes explicitly in exchange for sexual acts. This is accompanied by a rapid rise of online sexual exploitation of Ukrainian women in the pornographic platforms such as “pornhub” where “Ukrainian women” has become the most searched “term" by the online perpetrators of sexual exploitation. At the same time, we received the reports from our members that women and girls, including unaccompanied female minors, are placed in mixed-sex accommodation, and, in the households with single males. Pregnant women, including victims of rape, are often placed in remote accommodation without access to appropriate and timely health care and, on some occasions are denied abortion.

There is a very serious lack of data collection and even though we know that most refugees are women due to the fact that adult men are not allowed to leave Ukraine there is no sex, age, disability disaggregation done by the border authorities or police. This lack is also significant in the cases of minors, where girls are not seen as a specific category at risk within an already vulnerable category of minors, despite CEDAW General Recommendations 38ofNovember 2020that "highlights the additional vulnerability of girls due to the intersecting characteristics of sex and age”.

Finally, we have received very disturbing accounts from practically all the countries where our members are proving direct support to refugee women, that states in their very justified attempt to receive and support Ukrainian refugees, discriminate against asylum seekers from other regions, in particular, Africa, Asia, Arab countries. Persons from these regions have been subjected to discriminatory treatment, which included their eviction from state sponsored accommodations in order to free the space for Ukrainian refugees, discrimination in food and sanitary kits distribution, as well as authorities telling them explicitly that their applications - which were at the last stage of review - would not be processed because they are no longer a priority.

- CLEAR AND DETAILED GUIDELINES ON THE IMPLEMENTATION OF TEMPORARY PROTECTION DIRECTIVE:

Such guidelines should be provided by state authorities to police, prefectures, migration authorities and tribunals, as well as NGOs accompanying refugees. The guidelines should not be ‘gender neutral’ but must take into account the specific needs of women and girls, and be closely aligned with the criteria for service provision in other existing national guidelines, such as those applied to women asylum seekers, victims of sexual or other forms of men’s violence against women, trafficking and exploitation.

Authorities must collect data on sex, age, ethnicity, disability. This is essential if we are to monitor, identify and prosecute the cases the exploitation and violence to which Ukrainian refugees may be subjected within Europe and at the borders. This data is also crucial to provide support to the women victims of rape and other men's violence committed by the Russian army on the territories of Ukraine.

- SINGLE SEX ACCOMMODATION AND APPROPRIATE CARE FOR WOMEN AND GIRLS:

Women, girls and young women in the reception and care facilities must be provided separate single sex accommodation, whereas all female victims, suspected or identified, regardless of age, must be provided female interviewees and support workers whenever possible, as per provisions of the Istanbul Convention and recommendations of the GREVIO committee, in particular in the states that ratified the Convention.

- SPECIFIC PROVISION FOR GIRLS AMONG MINORS:

In line with CEDAW General Recommendations 38 of November 2020 on Trafficking of women and girls in the context of global migration that "highlights the additional vulnerability of girls due to the intersecting characteristics of sex and age” member states must acknowledge and take intoconsideration, in policy and implementation, that girls and young women are disproportionally affected by specific forms of violence, exploitation and discrimination, including sexual-reproductive exploitation, exploitation in prostitution, exploitation through surrogacy and egg harvesting, as well as exploitation in domestic and care work.

- PREVENTION OF SEXUAL EXPLOITATION IN PROSTITUTION:

AMIF, ESF and other EU funding programmes must take into consideration the specific needs of women, including female children and young women, and install and implement strict criteria for 'gender mainstreaming' in all programmes and actions, whether by states, municipalities or NGOs. Grassroots women-led organisations operating on the ground must have access to direct and flexible funding to be able to provide consistent and quality services to Ukrainian female victims of violence.

We urge the EU to apply the principle non-discrimination and fair treatment of all asylum applicants, regardless of their race, ethnicity, nationality or religion. It should not be so that thousands of refugee women from Afghanistan, Somalia, Eritrea now must hear that they are no longer a priority in the EU.