Article 6 of the Convention on the Elimination of All Forms of Discrimination against Women (CEDAW) sets out States parties’ legal obligation to “take all appropriate measures, including legislation, to suppress all forms of traffic in women and exploitation of prostitution of women”.

Despite the many existing anti-trafficking legal and policy frameworks at the national, regional and international levels, females continue to comprise the majority of detected victims of trafficking across the world and perpetrators enjoy widespread impunity.

As a migrant women-led Network, the whole text of the GR 38 is crucial for us but, today, we would like to highlight the following four recommendations. 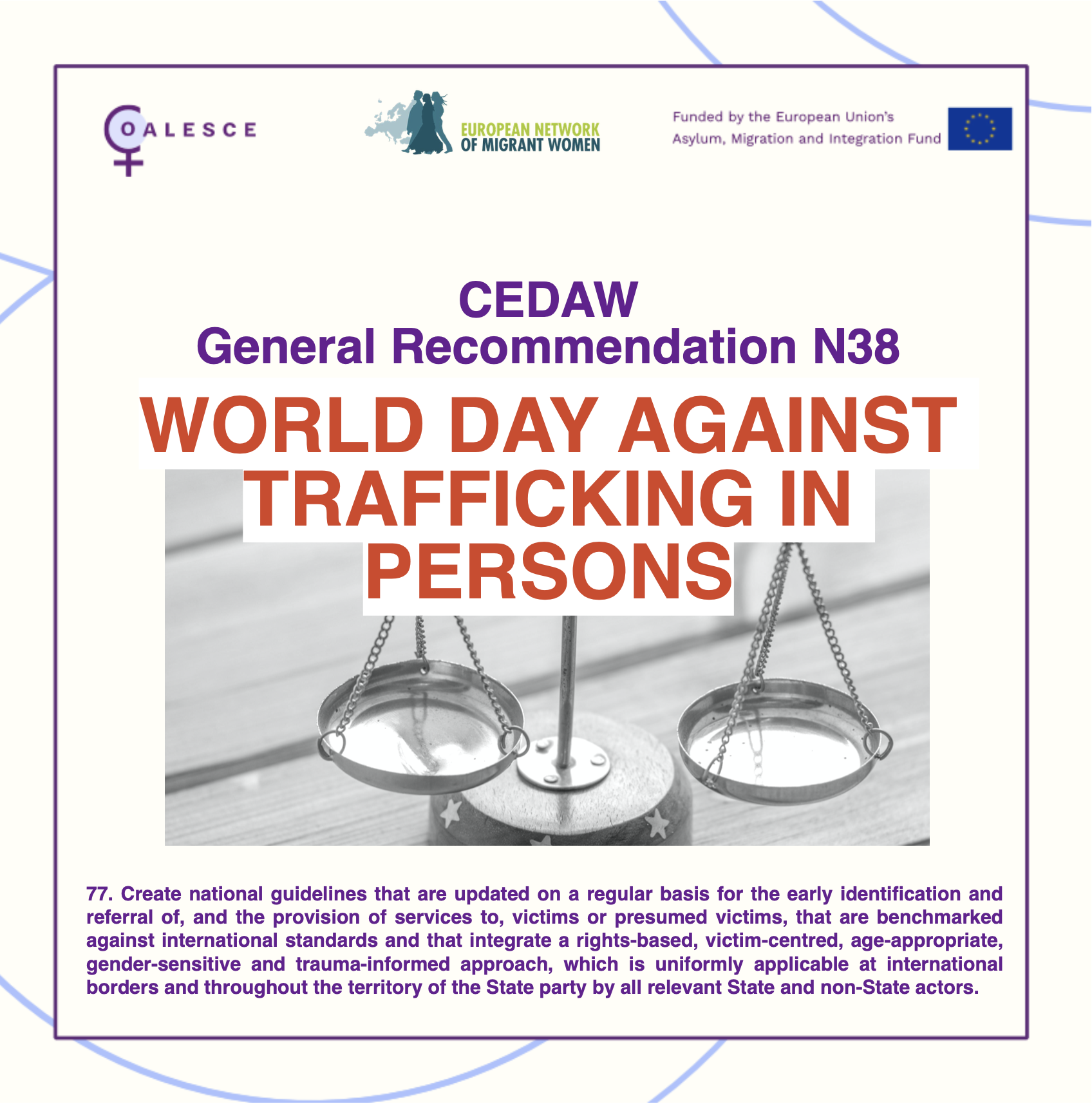 77. Create national guidelines that are updated on a regular basis for the early identification and referral of, and the provision of services to, victims or presumed victims, that are benchmarked against international standards and that integrate a rights-based, victim-centred, age-appropriate, gender-sensitive and trauma-informed approach, which is uniformly applicable at international borders and throughout the territory of the State party by all relevant State and non-State actors. 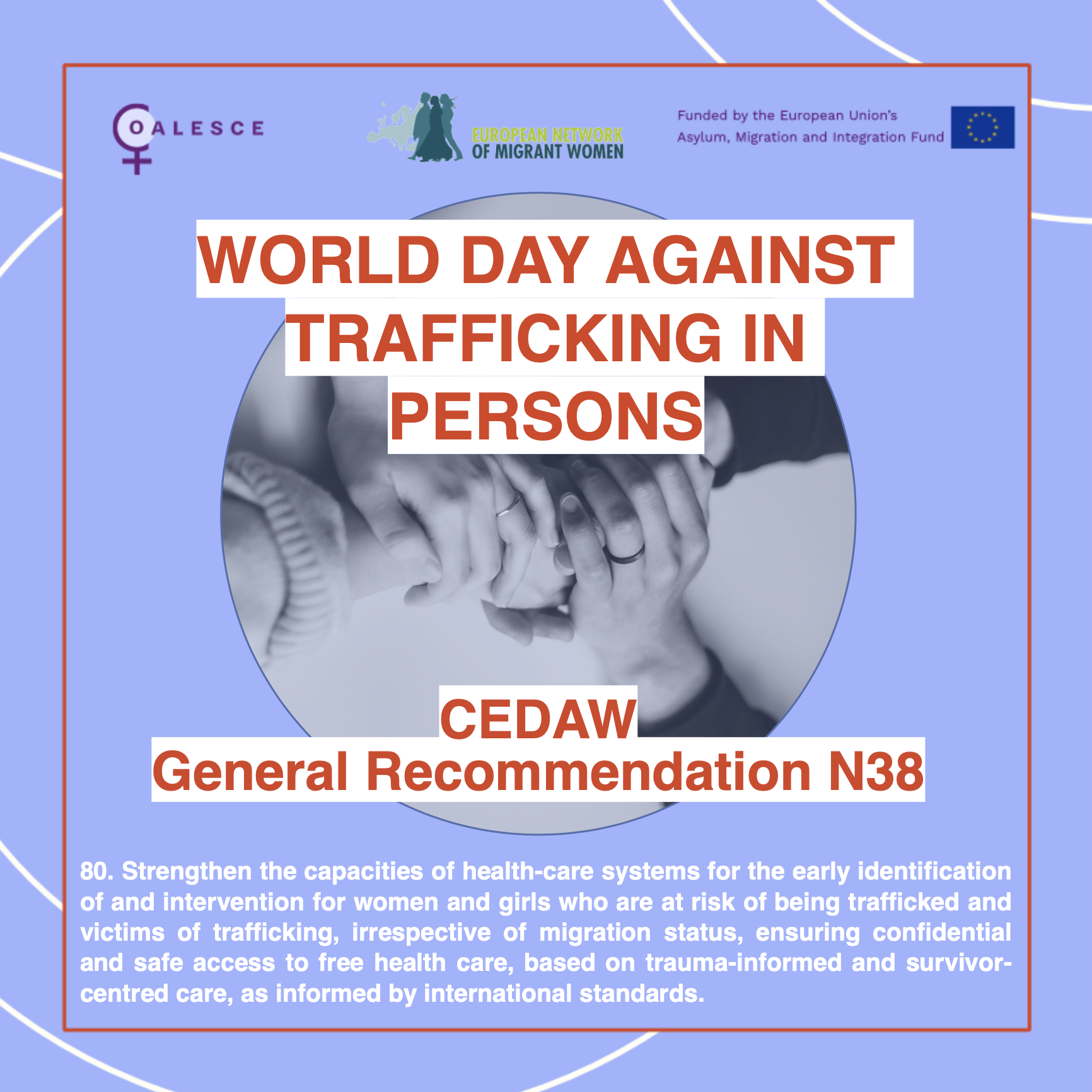 80. Strengthen the health systems’ capacities for early identification and intervention for women and girls, 𝑖𝑟𝑟𝑒𝑠𝑝𝑒𝑐𝑡𝑖𝑣𝑒 𝑜𝑓 𝑚𝑖𝑔𝑟𝑎𝑡𝑖𝑜𝑛 𝑠𝑡𝑎𝑡𝑢𝑠, at risk of trafficking and for trafficking victims, ensuring confidential and safe access to free healthcare, based on trauma-informed and survivor-centered care as informed by international standards. 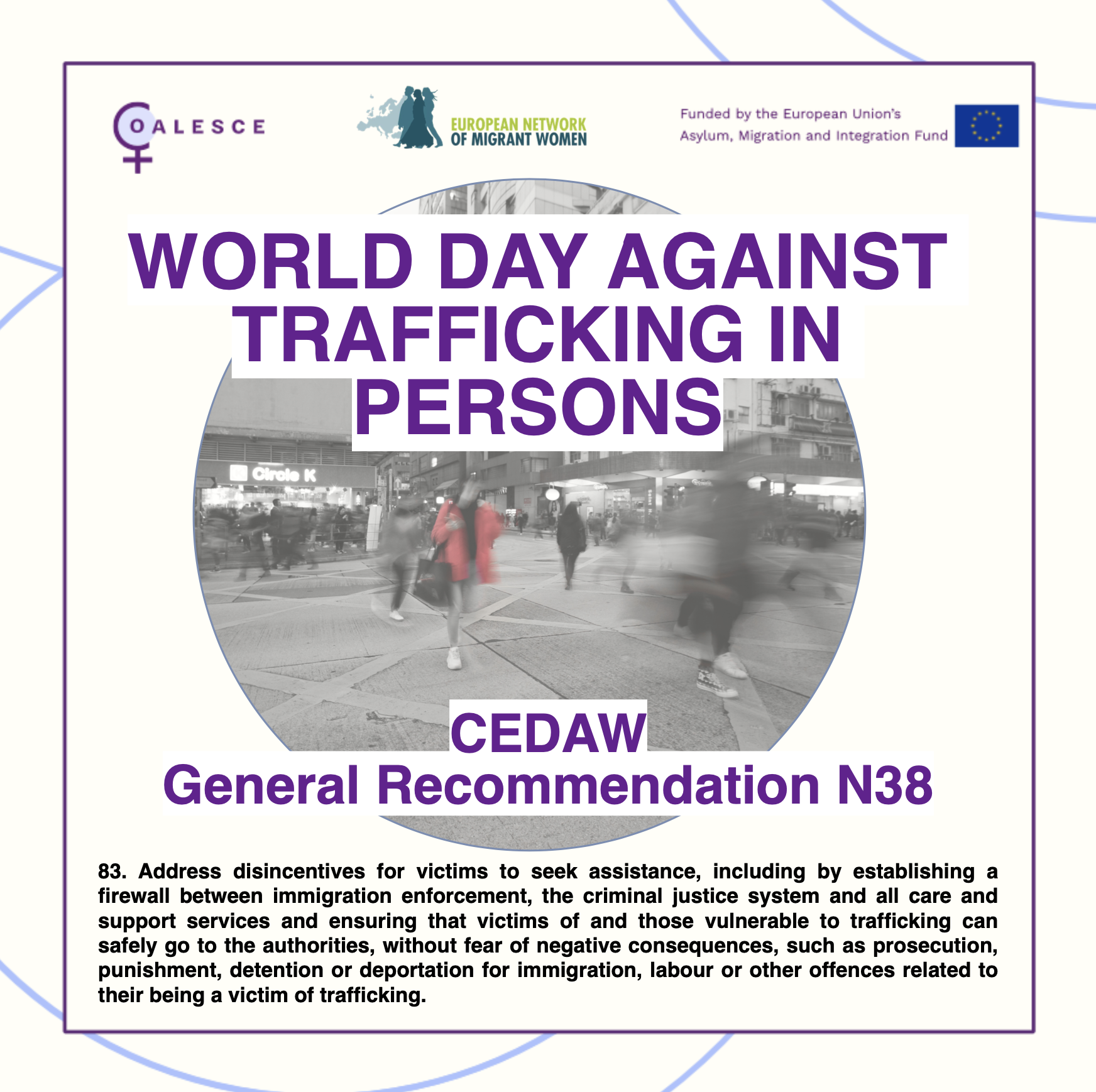 83. Address disincentives for victims to seek assistance including through establishing a firewall between 𝑖𝑚𝑚𝑖𝑔𝑟𝑎𝑡𝑖𝑜𝑛 𝑒𝑛𝑓𝑜𝑟𝑐𝑒𝑚𝑒𝑛𝑡, the criminal justice system and all care and support services, and ensuring that victims of and those vulnerable to trafficking can safely go to the authorities, 𝑤𝑖𝑡ℎ𝑜𝑢𝑡 𝑓𝑒𝑎𝑟 𝑓𝑜𝑟 𝑛𝑒𝑔𝑎𝑡𝑖𝑣𝑒 𝑐𝑜𝑛𝑠𝑒𝑞𝑢𝑒𝑛𝑐𝑒𝑠, such as prosecution, punishment, 𝑑𝑒𝑡𝑒𝑛𝑡𝑖𝑜𝑛 or 𝑑𝑒𝑝𝑜𝑟𝑡𝑎𝑡𝑖𝑜𝑛 𝑓𝑜𝑟 𝑖𝑚𝑚𝑖𝑔𝑟𝑎𝑡𝑖𝑜𝑛, labour or other offences related to their being a victim of trafficking. 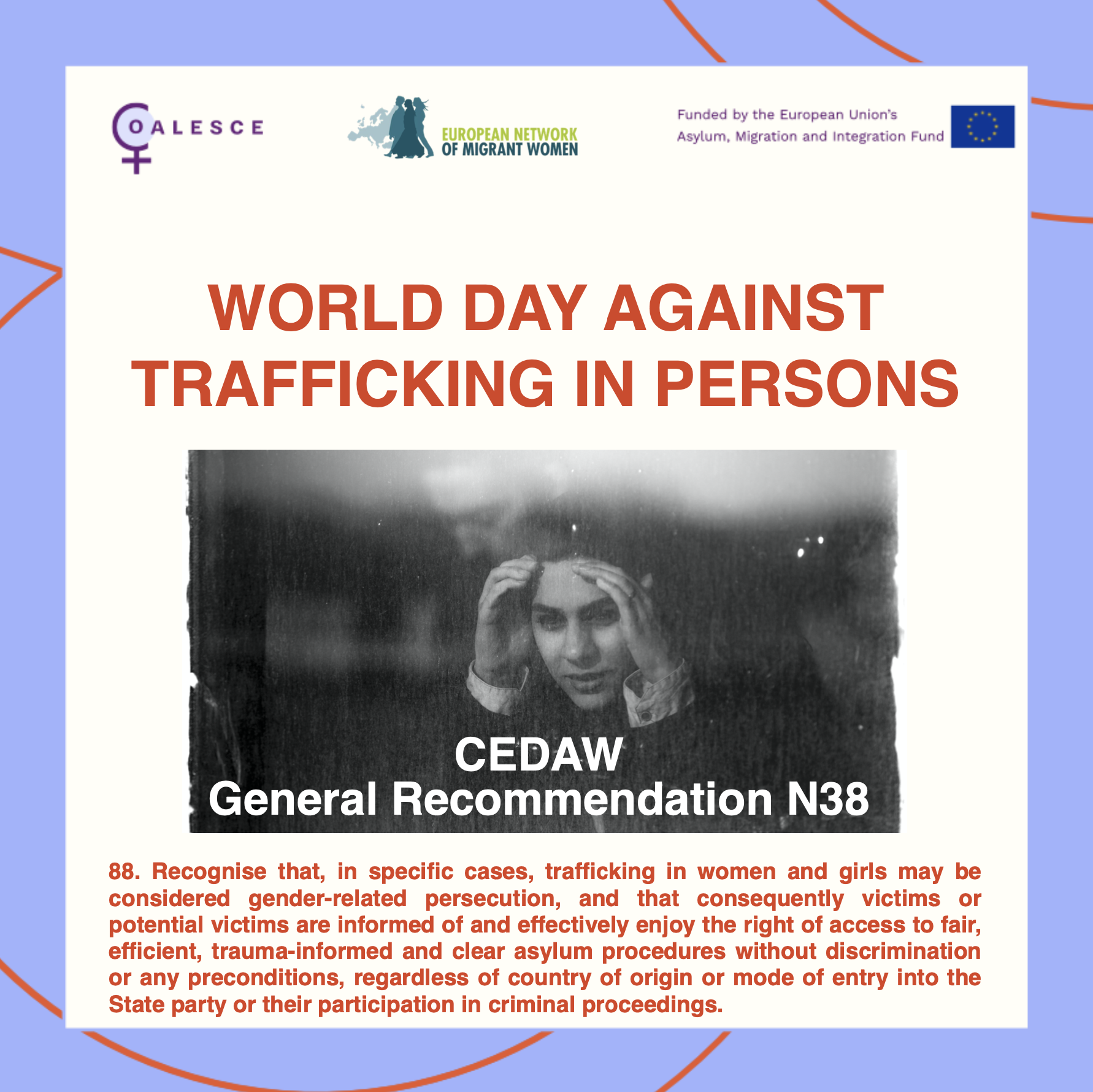 88. Recognise that, in specific cases, trafficking in women and girls may be considered gender-related persecution, and that consequently victims or potential victims are informed of and effectively enjoy the right of access to fair, efficient, trauma-informed and clear asylum procedures without discrimination or any preconditions, regardless of country of origin or mode of entry into the State party or their participation in criminal proceedings.