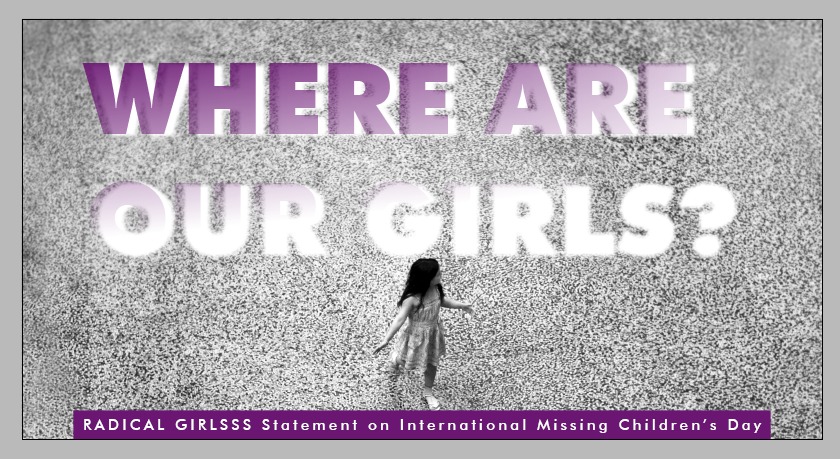 Where Are Our Girls ?

WHERE ARE ARE OUR GIRLS ? Radical Girlsss Statement for the International Day of Missing Children

The 25th May marks the International Missing Children’s Day, a day of remembrance to those children who have been abducted, abandoned, separated from their parents or disappeared along migration routes. As RadicalGirlsss, the young Women’s Movement of the European Network of Migrant Women, our focus is on young migrant women and girl-children. Today, we wish to bring attention to the missing migrant and refugee girls in Europe, in honour of all our little sisters whose whereabouts are up to this day unknown.

Half of the refugee population is made up of women and girls and yet we ask ourselves the question: “Where are our girls?”. The symbolic nonexistence of migrant and refugee girls has a direct impact on our lived realities. Girls are going missing, they have for a long time, and rarely they receive the attention they deserve in the official reports. Girls are going missing while the (political) world remains silent. From female genital mutilation and forced marriage, prostitution and trafficking, from rape to unlawful detention in closed centers, to those girls who ran away fleeing violence in their homes and countries - the lives of the missing girls go unrecorded and remain shadowed from the public eye. The silence that marks our existence is a symptom of our patriarchal society - we are always the Last Girl.

Missing Children Europe’ report states that girls constitute the majority of reported missing children (close to 58%), both inside their country of origin and across borders, whereas in the years 2018-2020, over 18.000 migrant and refugee children went missing in Europe, according to the Lost In Europe investigation. Yet, as the Lost in Europe report shows, many states do not collect, or release, data on children disaggregated by sex, and the causes of abduction, murder, disappearance of girls in migration is not seen as related to structural gendered inequalities, or as a patriarchal discrimination and violence affecting girls specifically and disproportionately.