On the occasion of the International Day of Migrants, European Network of Migrant Women is inviting you to join us in commemorating the lives of migrant women and girls perished in the systemic and interpersonal male violence in Europe. 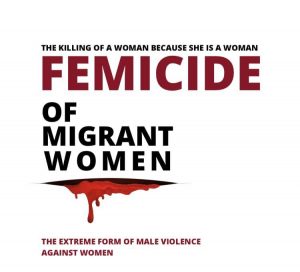 “Femicide is a grave and unacceptable violation of women’s and girls’ most basic human right to life. It is a leading cause of premature death of women globally. Although the rate of homicide has been on the decline across the world, the rate of femicide has remained the same, and, in some contexts, increased.

According to Diana Russel who presented the term at the 1976 International Tribunal on Crimes against Women in Brussels, femicide applies to all forms of sexist killings “motivated by a sense of entitlement to or superiority over women, by pleasure or sadistic desires toward them, or by an assumption of ownership of women”. The Latin American feminists defined femicide as “the misogynist killing of women by men;” “the mass killing of women committed by men based on their group superiority;” and “the extreme form of gender-based violence, understood as violence inflicted by men against women in their desire to obtain power, domination, and control.”

The Latin American Model Protocol for the investigation of gender-related killings of women defines femicide as “the murder of women because they are women, whether it is committed within the family, a domestic partnership, or any other interpersonal relationship, or by anyone in the community, or whether it is perpetrated or tolerated by the state or its agents”.