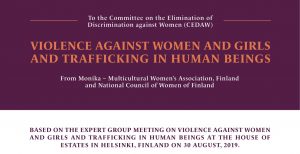 On 30 August 2019, European Network of Migrant Women, along with a group of civil society experts, participated in the regional CEDAW Consultation expert meeting [Consultation on CEDAW Art 6], organised by our Finnish member MONIKA -Multicultural Women Association (and umbrella platform of 16 migrant women NGOs in Finland) and National Council of Women of Finland.

The outcomes of the meeting state:

“The Monika – Multicultural Women’s Association, Finland and the National Council of Women of Finland underline that trafficking in human beings and exploitation in prostitution are severe forms of violence against women. We urge the importance to take all necessary efforts to decrease and prevent these human rights violations.

We strongly encourage the CEDAW to re-consider the chosen framework of the forthcoming General Recommendation on Trafficking of Women and Girls in the Context of Global Migration and protect women and girls from violence and exploitation as well as to abolish the use of the term “forced prostitution” and “sex work”.

We strongly claim, that the image of women and girls who make independent choices on prostitution is problematic. Female minors, women migrants, racialised women, and women in difficult life situations are particularly vulnerable to exploitation and violence. For many women in prostitution, violence is part of their everyday life, and violence is often one of the underlying reasons for women to become involved in prostitution.

An expanding sex-industry involves expanding violence and abuse of minors, undocumented persons and other people in vulnerable situations. In our view, it is both patronizing and racist to present the selling of sex as an acceptable route out of poverty.

There is strong evidence that trafficking, prostitution and exploitation of women and girls in vulnerable situations are linked to other forms of violence against women. The choice to be educated, to have a decent job, and a salary to feed one’s family should not have to be achieved through exploitation.”