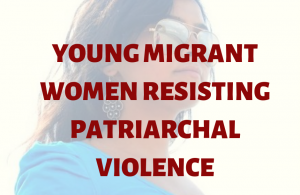 “The topic of my speech today is about building a feminist generation, that will be a strong feminist generation. It is about the young migrant women who, like all women, are the victims of violence, linked to the fact that we still live in a world where men are in charge; a world of men’s domination.

The young migrant women experience high pressure in the country of origin, and they also play a crucial role in fighting the male oppression.

For this reason young women often leave the country of origin to study abroad, or to find a job, or to look for a better life, to flee men’s control. These women arrive with skills, capacity, and full of energy, and again, suddenly, are dominated by men. This is a vicious circle for them in which men try to gain control over them, over and over again.

After migrating to Europe women are going to face administrative problems, legal problems, sexist and racist remarks, and also cultural relativism, that is when they are told “This is your culture, we are not going to discuss your culture”, with culture being a kind of taboo topic.

This means that these women are going to be even more excluded and discriminated. This means that at least half of their rights will not be recognised.

These women are under pressure on behalf of their families who expect more from them – because they are women – than from men. After they complete their studies, or have worked abroad for a few years, very often these women can no longer go back to their countries of origin. They have to stay in their host country because they cannot simply resume their former, old, life in the country where they came from, after having spent several years abroad.

Women arrive to Europe from all over the globe. Often, very quickly they end up in difficult, dangerous situations. In France, for example, they often end up in the hand of the trafficking networks. These women are looking for jobs, they, are of course, in a vulnerable situation, so they become victims in the hands of pimps, controlled by men and organised trafficking rings.

We should always bear in mind that even despite this, these young women continue fighting for their rights. They continue denouncing male domination. For these women it is a daily fight. They are here to prove that they are worthwhile and they have a role to play in a society despite the fact that they suffer violence on a daily basis.

We work with these women every day and when we ask them, “What are you looking for?”, they all answer “All I am interested is my freedom. I want to survive, exit prostitution. I want to be free”.

Another type of violence young migrant women suffer today – and that’s very frequent in France – is Forced Marriage. Often the young women end up being forcedly married to their cousins or other male members of extended families. So they end up in a cage. They come to see us in our association and sometimes they tell us they are not even entitled to receive food, to feed themselves. If they don’t accept everything what their so-called husbands want to do to them, they are not even fed. This is why these women seek the help of associations such as ours, to find their way out and to recover their freedom.

However, this fight has to be reinforced. We are here today to assert this. We need to do it in order to fight patriarchy, which is taking new forms and keeps reinventing itself.

We need to take back control over our bodies, our decisions, our autonomy. We need to be strategic in the way we do it and we need to be united in our fight against everything that undermines our rights and our own fight.

We need a greater solidarity and we need to revisit what our mothers and our grand-mothers have done. They were feminists too, even though they may not have called themselves such. It is because of them we are here today.

We need to understand the history of feminism. We need to claim it. And we need to continue it.

We cannot give up this fight. We cannot let it go. We have to recognise and claim feminism, because we see that today many young women and girls do not want to see themselves as feminists.

This is not an institution. This is a movement and a revolution. The revolution of young women and girls, who say “No more violence”.

I am sure you will meet them in a couple of months. The movement has been created. There is a group now. We still need to work on different issues before the final kick off of the group.

The aim of this group is not simply to work among ourselves. We want to meet other women in Europe and outside of Europe. We want to create solidarity throughout the world. ”

Noura Raad is 28 y.o. Lebanese feminist, residing in France. She is a board member of European Network of Migrant Women (ENOMW), member of Forum Femmes Méditerranée (FFM) in France, and holds a PhD in Comparative Criminal Law on the Status of Women. Contact: noura@migrantwomennetwork.org