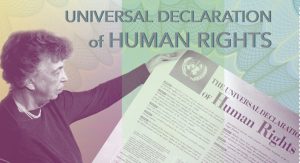 2018 marks the 70th anniversary of the Universal Declaration of Human Rights and has been accompanied by various activities around different human rights-related themes. The Declaration consists of 30 articles and was adopted by the United Nations General Assembly on 10 December 1948. Since then, Human Rights Day is celebrated annually across the world on 10 December every year. As a major milestone in the effort to provide human rights protection to all human beings irrespective of nationality, sex, ethnic origin, religion, race and legal status, the Declaration served as a model for international human rights treaties around the world.

While we celebrate human rights day, it is also high time to ask whose human rights are guaranteed and under which conditions migrant, refugee and asylum seeking women and girls ‘enjoy’ their fundamental human rights.

Although universal in spirit, state-centred nature of human rights treaties allows countries to establish their own standards and accord rights differently with regards to status (e.g. undocumented, refugee, asylum seeker). The lack of real international enforcement mechanisms for human rights enables countries to comply with treaties at their own discretion. This selective enforcement considerably limits the rights of migrant women and girls.

While having such rights in theory, in practice, migrant women are discriminated against in multiple ways.

Most women migrate to avoid the violations of their rights in the countries of origin. Many of those violations happen in private sphere and are justified by compliance to cultural and religious norms. Others occur in the area of employment and economic opportunities as women are increasingly pushed out of the labour market due to impoverishment through free-market policies, loss of jobs and land, climate disasters and man-made conflict.

Although most women in Europe are the holders of human rights since the beginning of post-World War II human rights movements, too many of them still cannot enjoy their rights to work, bodily integrity and freedom from violence. In the case of migrant and ethnic minority women the harmful practices and traditions migrate across borders, claiming to be the inherent part of “culture” and “tradition”. Racism, ethnic discrimination and ethnocentric attitudes of ‘cultural relativism’ perpetuate harmful traditions and resistance to change them.

Universal human rights treaties, therefore, are increasingly defeated by the lack of social and political will to recognise that migrant, refugee and ethnic minority women are entitled to the full range of human rights.

The EU’s “migration crisis” has drawn attention to the high political level of gender-based violence refugee and asylum seeking women face both on the road and in destination countries. European Parliament, European Union Agency for Fundamental Rights (FRA) and several EU wide NGOs highlighted that these women experience multiple forms of violence including forced marriage, intimate partner violence, domestic violence, rape, sexual assault and exploitation. Even though gender-based violence is known and accepted as violation of human rights, and prevention of GBV is addressed in related treaties including CEDAW and Istanbul Convention, the progress made in practice is still very unsatisfying.

On the ground, in many EU states legal rights and social protection for refugee women and girls are excluded. These women in the European countries are made to live in the shadows of society without sufficient protection and support. This makes them much more vulnerable to economic and physical abuse. Women and girls have very limited access to education, safe living conditions and sexual and reproductive health-care services. They face harmful practices including child and forced marriage and female genital mutilation. They are trafficked, exploited in prostitution, domestic and care work, farming and hospitality industries. In addition, the majority of refugee/asylum seeking women do not have equal access to legal services and justice.

In many states they are legally prevented from accessing domestic violence shelters, maternity services, housing and protection and compensation in cases of Domestic abuse.

Despite some gains in policy and practise and powerful commitments in New York Declaration, Global Compact on Refugees remains insufficient in protecting the rights of female refugees.

Under such circumstances, it would not make sense for migrant/refugee women and girls to celebrate human rights day. It is explicit that specific challenges and needs of migrant/refugee women and girls require different remedial and preventive actions under human rights law. Potential benefits of female migration can only be realised if their rights are respected and fulfilled.

As we celebrate Human Rights Day today, we call upon states:

Human rights treaties can be much more effective and stronger tools through persistent advocacy. Therefore, we call upon human and women rights groups

Because, dignity, equality and freedom have no sex, nationality and religion.