ASYLUM SEEKING AND REFUGEE WOMEN: TACKLING THE BARRIERS IN THE ASYLUM PROCEDURES IN THE EU

The following recommendations are based on the  Council of Europe Convention on Preventing and Combating Violence against Women and Domestic Violence (Istanbul Convention), which entered into force on 1 August 2014.

The Istanbul Convention focuses specifically on protecting asylum seeking and refugee women in its Articles 60 “Gender-based asylum claims” and 61 “Non-refoulement”. Unfortunately, when having a closer look at enforcement possibilities of those provisions, it becomes clear, that hard consequences cannot be enforced on the signatory states. This lack of accountability makes implementing the Convention especially hard.

A lot of actors, such as the European Parliament have tried to change the situation by urging the Member States to implement certain measures. (Examples: EP report on gender-related asylum claims in Europe, EP resolution on the situation of women refugees and asylum seekers in the EU, GREVIO and NGO-coalition report on the situation in the different countries). However, those measures have only limited impact.

This article gives a brief overview on the most important measures on how to establish a fairer outcome. 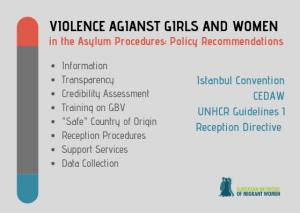 Information about the possibility to be granted asylum on basis of gender-based persecution has an enormous impact on what women will disclose and therefore the outcome of their application. It is necessary to provide women from the beginning of their application process with information relevant to the procedure in their own language or at least a language, they can understand. This information needs to contain the details on how the procedure works, how the interviews are held and the rights they are entitled to; for example, the possibility of an interview separate from their husband or interviews held by female staff.

As part of an improved information process, the procedures need to be more transparent to the applicants themselves. One possibility to do this, is by providing a transcript of the interview afterwards and thus giving the applicants the chance to add facts and details in a more relaxed atmosphere, making them feel safer and more confident to tell their stories.

Although already over 50 years ago the Refugee Convention introduced the principle of non-refoulement, it still gets violated in many cases. Only in 2002, the UNHCR admitted that “the refugee definition has been interpreted through a framework of male experiences, which has meant that many claims of women and of homosexuals, have gone unrecognized”. Fortunately, Article 61 of the Istanbul Convention connects the non-refoulement principle to “victims of violence against women”. In a lot of cases, women, who did not dare to mention gender-based claims in the first interview, will be given less credibility in the following one. Therefore, the burden of proof needs to be reduced and the authorities should be trained in establishing a proactive questioning manner. Also, additional aspects, such as mental health or the situation in the country of origin, should be taken into account in each individual case.

All  staff working with asylum seeking and refugee women should be trained on the needs of those women, as their mental health or cultural characteristics may influence the women in their statement. But as it is close to impossible to train every person as soon as he or she starts working with asylum seeking and refugee women, a rulebook on how to behave in certain situations and the need to take gender-based persecution into account, should be established and given to the employees before their first day of work.

Concept of the ‘safe country of origin’

Women are at risk of gender-based persecution in every country. If the state is unable or unwilling to protect them, they have the right to be granted asylum in the host country. Nevertheless, the European Commission proposed a regulation on a EU common list of safe countries of origin, which would give the hosting country an excuse to deny asylum. This concept of a safe country of origin needs to be abolished and the decision on asylum claims should be made on  a case to case basis. Furthermore, educational background should not be taken into account when deciding over an asylum application.

Unfortunately, authorities in different countries tend to assume that shared accommodation of women and men will help women integrate faster into society after they leave the accommodation facilities. This creates an atmosphere of fear for women, especially for those who fled male violence. Therefore, it is necessary to have separate rooms and separate bathrooms, if possible in separate buildings, but at least in separate hallways. Furthermore, all the facilities should have locks and only the women and the (female) staff using the rooms should receive the keys to those rooms.

Along with the Istanbul Convention, the Reception Conditions Directive as part of the Common European Asylum System (CEAS), demands the Member States to establish support services. The Directive establishes specific support for “vulnerable persons” (such as “[…] pregnant women, single parents with minor children, victims of human trafficking, […] persons who have been subjected to torture, rape or other serious forms of psychological, physical or sexual violence, such as victims of female genital mutilation”). As the women tend not to disclose GBV it is very difficult to identify ‘vulnerable persons’ among them. Therefore, all women should be entitled to support services matching their needs. One example for a support service is childcare during the interview to allow the women to focus on the interview and not feel restrained to talk about the violence they experienced in the presence of their children.

Last but not least, data collection should be an integral part of those measures. Although the Istanbul Convention demands the signatory states to collect disaggregated data, the provision is implemented insufficiently. To improve the situation, data on whether women get granted asylum or subsidiary protection on gender-based grounds needs to be collected, in addition to the data disaggregated by sex-, age- and ethnic-origin,  of all applications for asylum or international protection.

This is not a final list and a there is still a lot to improve. Fortunately, a lot of these measures are already implemented by grass root organizations and volunteers. But helping all women with only limited resources remains difficult, as populist and anti-refugee movements are on the rise and funding for these organizations is cut.