ONE YEAR SINCE EU’s ACCESSION TO ISTANBUL CONVENTION: DISAPPOINTING LACK OF PROGRESS 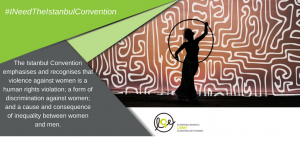 Brussels, 13 June 2018 – On the occasion of the first anniversary of the signature of the Istanbul Convention by the European Union (EU), the European Coalition to end Violence against Women and Girls regrets that strong progress towards the ratification has been hindered by retrograde forces, and calls for concluding the process without further delay.

Violence against women threatens the security of half of the population in the EU, affecting over 250 million women and girls. One in three women has experienced physical and/or sexual violence since the age of 15 and 96% of EU citizens consider that violence against women is unacceptable. European citizens want action and there is no more time to waste.

On 13 June 2017, the EU signed the Istanbul Convention, sending a very strong political message on its commitment to end violence against women and girls.

Yet today, one year on the EU has unfortunately made little progress with the ratification process. While the European Parliament adopted a strong resolution last September, the Council negotiations on the Code of Conduct remain ongoing, and, with a complex process to undertake in accession to the Convention, the need for immediate action has become critical. Therefore, we urge the upcoming Austrian EU Presidency to stand up for women and advance the ratification process as swiftly as possible, to ensure that all women and girls in Europe can live their lives free from violence.

We, the European Coalition to end Violence against Women and Girls call for

We hope that next year we will not celebrate another anniversary without the final EU ratification.

The European Coalition to End Violence against Women and Girls is an extensive strategic alliance of more than 25 cross-European human rights and social justice civil society organisations working collectively to ensure that women and girls across Europe can live their lives free from all forms of violence.