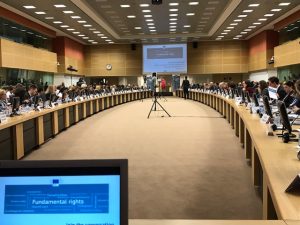 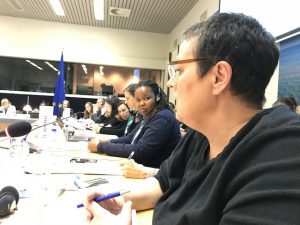 European Network of Migrant Women took part in the 2017 EU Colloquium on Fundamental Rights that was held in Brussels under the patronage of EC Vice-President Mr France Timmermans and this year was dedicated to the Rights of Women. The event brought together several hundreds of legal experts, activists, academics and specialist service providers in the area of women’s rights, gender equality and violence against women.

Following the opening speeches that included a very powerful presentation by the prominent UK historian Mary Beard, who emphasized the pervasive tradition of attacking women’s free speech and self-expression in Europe, the floor was open to the participants through a series of thematic discussions covering a range of subjects: from women in decision-making, economy, employment and science to violence against women. 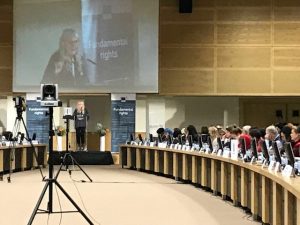 “It is important to understand how deeply silencing of women is ingrained in the Western culture”, Mary Beard

Several of the speakers emphasised a particularly difficult situation of migrant, refugee and ethnic minorities women, including those who are undocumented and in precarious legal status. The intersection of racism and misogyny and the duty of holistic complex analysis, protection and service provision for the women of color was also brought up in the course of the first day of the event. It was also clear throughout the discussions that the rights of Women in Europe are universally under attack, in all EU states and from various forces, including the far right, conservative and anti-choice movements that gain particular prominence in countries like Poland and Hungary. At the same time the gender pay gap and level of violence against women have increased.

Regrettably, even though a lot of emphasis in the colloquium was placed on “intersectionality”, not enough was said about the need for a collective action, solidarity among different groups of women and a unified women’s movement that is currently being not only attacked by the far right, but also internally fragmented. The dangers  of cultural relativism that often position migrant and refugee women as a “different group”, thus, overlooking the universal patterns of male violence women experience across different cultures, was also not sufficiently addressed. 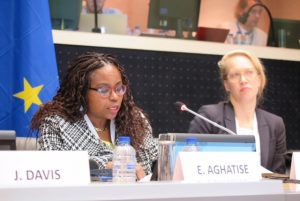 “We need to recognise that putting women’s bodies on sale is violence against women. A woman turns to prostitution as means to survive, not by choice”, Esohe Aghatise, Iroko Onlus

On the second day of the Colloquium, following the plenary, we took part in the session on Trafficking in Human Beings, that focused on different forms of exploitation and trafficking in women. The session was opened by three important interventions: from International Coalition against Prostitution, the Italian NGO Iroko Onlus and the Finnish National Rapporteur’s office on THB. All three imphasised the current failure of implementing the EU laws on trafficking and the increase in the actual trafficking victims both for sexual exploitation and forced labour. The speakers questioned the adequacy and sufficiency of EU policies on trafficking in the face of normalising the market of sex trade, which is expanding in most states with an excpetion of those who have adopted the Nordic Model on Prostitution.

Myria Vassiliadou, the EU Anti-Trafficking Coordinator also reiterated that the EU Anti Trafficking Directive (36) is not implemented in most states, which poses the question whether the states are willing to put a end to trafficking in women – one of the most appalling violation of women’s rights and a clear obstacle to equality between women and men in Europe.

Ms. Merklinger, a survivor of prostitution from Germany and a member of SPACE International, shared her experience of the German sex trade where, according to her, women exploited in prostitution have practically no support or state programmes to help them leave the market of sexual exploitation. ENOMW also contributed to the discussion by emphasising that sexual exploitation of women in Europe lies on the continuum of male violence against women and affects in particularly grave way migrant women, whose lives are positioned at the nexus of several intersecting vulnerabilities, including sex, race, class and legal status.

Below are the opening speeches from the Trafficking in Women session.