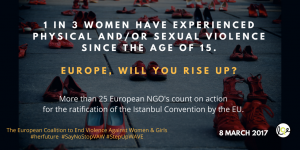 Violence against women and girls: will Europe rise up in 2017?

A unique Coalition of more than 25 European-wide networks and NGOs dedicated to social justice and equality, the European Coalition to end violence against women and girls calls on the EU decision-makers to mark International Women’s Day with concrete actions.

Violence against women and girls continues to be the most pervasive violation of women’s human rights in Europe and worldwide, and affects the lives of millions of women and girls.

“Today, while marking the International Women’s Day, we want to break the silence around violence against women and girls. We need to speak up! How much more evidence do we need before decision makers take action? How many more women should be beaten, raped, killed, prostituted, harassed, psychologically abused, before Europe finds it unacceptable? Today, more than 25 European wide networks are joining to ask EU decision makers to listen to women’s voices and demands: Women and girls across Europe want to live a life free from violence and fear” says Edith Schratzberger-Vécsei, President of the European Women’s Lobby.

The European Coalition to end violence against women and girls warmly welcomes the Malta Joint Statement of 3/02/2017: a landmark initiative where three European Institutions (European Parliament, European Commission and the Council Presidency) have jointly made a strong call for action to the Member States, asking them to ratify and fully implement the Council of Europe’s Convention on preventing and combating violence against women and domestic violence (Istanbul Convention) and to approve the EU’s accession to this Convention in a meaningful way.

“Violence against all women and girls is a political issue. When some countries don’t take up their responsibility to ensure safety and integrity of all women and girls, it means that they deliberately want to build societies where women’s rights are not respected, where women and girls are considered inferior and their bodily integrity is not protected”; says Anna Zobnina, chair of the European Network of Migrant Women.

“The European Union should ratify the Istanbul Convention without further delay. This has also  been one of the human rights recommendations that the European Union received from the United Nations in 2015, as a key step to ensure protection of women and girls with disabilities since they are at even higher risk of violence, abuse and forced sterilisation’, says Ana Peláez, Chair of the Women’s Committee of the European Disability Forum.

“The ratification by the EU of the Istanbul Convention will send a strong political signal that violence against women is not acceptable anymore. The EU Member States should ensure that the EU ratification is done as soon as possible, in the broadest way and without reservations”, adds Liuska Sanna, Director of End FGM Network.  “The signature of the Istanbul Convention by the EU will also serve to promote increased coordination policies across EU institutions and ensure a coherent approach between the EU internal policies and its external policies on the promotion of the fight against violence against women and girls, including in the EU Southern neighbourhood”, adds the President of EuroMed Rights Michel Tubiana.

The European Coalition to end violence against women and girls considers that it is extremely important to acknowledge how certain women face greater risk of violence because of motives fuelled by sexism coupled with racism, xenophobia, homophobia as well as discrimination based on age, disability, ethnicity or religion. Women and girls with migrant background, undocumented migrant women, refugee women and asylum seekers, women and girls with disabilities, lesbian, transgender or intersex women, Roma women and girls, young women and elderly women, homeless women, black women, Muslim women…. Many women in Europe face intersecting forms of discrimination that prevents them from accessing justice and support and protection services, and from enjoying their fundamental rights.

“The Istanbul Convention sets a comprehensive set of standards to prevent violence and to guarantee the right to every women to live free from violence. This right is not reality for millions of women and their children in Europe yet: more that 50,000 women shelter places are missing and many victims do not get appropriate protection and support! We urge Member States to support the WAVE Step up Campaign and ensure that the implementation of all the Istanbul Convention measures is done without discrimination on any ground ” says Rosa Logar, Chair of WAVE Network.

PICUM Director, Michele LeVoy adds: “This is very important to ensure that undocumented migrant women can have access to justice and reparation, which is far from being the case right now. It is critical to understand how policies in other areas – such as migration – undermine efforts to end violence against women, and in fact put women at greater risk. We need leaders who speak out in favour of the rights of all women.”

Today in Europe – Facts and figures:
In Europe, 50 women die every week from male domestic violence[1].
95% of all acts of violence taking place within the home are against women
One in three women has experienced physical and/or sexual violence since the age of 15.
Every second woman has been confronted with one or more forms of sexual harassment.
75 % of women in top management positions have experienced sexual harassment at work.
As many as 1 in 4 women experience physical and/or sexual violence during pregnancy which increases the likelihood of having a miscarriage, still birth and abortion[2] 60% of homelessness women cite domestic violence as one of the causes of their homelessness.
Violence against women can have life- long implications for the physical and mental health of women.
Certain women face a greater risk of violence because of motives fuelled by sexism as well as racism, xenophobia and other forms of discrimination. Furthermore, intersecting forms of discrimination limit access to justice and support and protection services.
Between 50% and 60% of women mental health service users have experienced domestic violence, and up to 20% will be experiencing current abuse.
28% of older women had experienced some kind of violence and abuse at home in the 12 months prior to a survey.
Women with disabilities are 2 to 5 times more likely to be victims of violence than non-disabled women and are subjected to sterilisation and abortions against their will. There are 46 million women and girls with disabilities in Europe, representing 60% of the overall population of persons with disabilities.
34% of women with a health problem or disability have experienced physical or sexual violence by a partner in their lifetime.
Roma women are more likely to face early marriages and attacks on their physical integrity, such as forced sterilisation.
23% of lesbian women had been at least once physically/sexually attacked or threatened with violence at home or elsewhere (street, on public transport, at your workplace, etc.) in the last 5 years.
Undocumented women and women with a dependent migration status (on a spouse or employer) are at a heightened risk of violence and exploitation. Because of the risk of being detained and deported- rather than assisted-, they face particular barriers in accessing support, protection and services.
85% of young women in the UK experiences sexual harassment in public spaces. Women of colour receive a barrage of racism when they object to harassment.
60 to 100% of victims of hate crime attacks on Muslims in Europe are women, especially women wearing headscarf, demonstrating a disproportionate effect on women as victims of such attacks.
At least 500,000 women and girls live with the lifelong consequences of female genital mutilation (FGM).
Violence against women costs 226 billion euros each year, which represent almost 2 % of the annual EU budget[3].

In order to set up the interviews, or get more information, background or visual materials, please contact Elvira Buijink, Communications and Media Officer, European Women’s Lobby; Tel: +32 2 210 04 40; buijink@womenlobby.org, and seewww.womenlobby.org.

The European Women’s Lobby (EWL) is the largest umbrella organisation of women’s associations in the European Union (EU), working to promote women’s rights and equality between women and men. EWL membership extends to organisations in all 28 EU Member States and three of the candidate countries, as well as to 20 European-wide organisations, representing a total of more than 2000 associations. Find the statement on our website.

The Istanbul Convention- Council of Europe Convention on preventing and combating violence against women and domestic violence is the first legally binding treaty in Europe that criminalises different forms of violence against women including physical and psychological violence, sexual violence, sexual harassment and rape, stalking, female genital mutilation, forced marriage, forced abortion and forced sterilization. In March 2016 the European Commission made a proposal for the EU to become party to the Convention. The proposals made by the Commission are currently being discussed in Council. The European Parliament will then need to consent to the EU’s accession.

Malta Joint Statement – European institutions’ call for action, was signed by the Council Presidency, the European Commission and the European Parliament on the 3 February 2017, at Conference on the EU responses to violence against women organised by the Maltese Presidency.

European wide NGOs engaged in the European Coalition to end violence against women and girls: